This is the first gimbal I have, and I must say, it is great. I have been using it for two weeks now and I love it. At first it is a little tricky until you learn how to control it. The controls are pretty simple. There are a few modes: Pan Mode – which follows the gimbals movement, but locks the up/down angle of the camera. Lock Mode – which follows the movement left/right and up/down(this is the easiest mode to use because you do not have to worry about manually moving it). Pan and Tilt Mode – the camera is fully locked in the position it is facing(this means no matter how you move the gimbal, the camera will still point in the same direction). Other than the modes, you have a joystick which you can use to manually pan/tilt the camera. The gimbal also has an app, for both iOS and Android, that you can use to make things simpler. The app connects to the shutter button on the gimbal, allowing you to easily take pictures and videos. It also has features such as face detection; you could select a face and when you start recording the app will remember the face and the camera will follow the person. However, the app only gives me a maximum video quality of 1920×1080 vs my phones(Galaxy S8) camera which can go as high as 3840×2160. I also have a 60fps option on my phone and the gimbal app does not.

Then there is the battery. This gimbal has two 2000mAh batteries, giving you a total of 4000mAh battery life. The batteries are lithium-ion rechargeable batteries. They claim it lasts 10-12 hours, which is more than enough to have to worry about. I have not experienced any battery issues yet, so I would say the claim is correct. The gimbal handle has a nice and soft grip on its handle. It is very comfortable to hold and your hand doesn’t get tired of the grip. The gimbal also comes with a built in universal ¼” thread, which means you can mount it on any tripod or monopod(although I don’t really see the need for it, since the tripod is already steady). They also included a counterweight, for when using a larger phone to balance the gimbal and make the camera straight. In order to calibrate you have to put your phone in, power on, click the power button 5 times, then lay the gimbal on its side on a flat surface.  I tried this, but wasn’t able to get my phone exactly balanced, even when using the counterweight. It becomes better, but still a little bit crooked(and that bothers me). Even though everything else works fine and is smooth, the whole point of a gimbal is to be balanced. Because of this, I think the gimbal is not quite ready for proper use. I hope they release a software update for it to fix this issue. I would also like it if they make a carrying case like other brands(DJI, Zhiyun) have. At the moment I am always worried about how to take it somewhere. Overall, it is a great gimbal, but not ready. Either a software update, or a newer version would make this perfect. 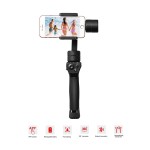